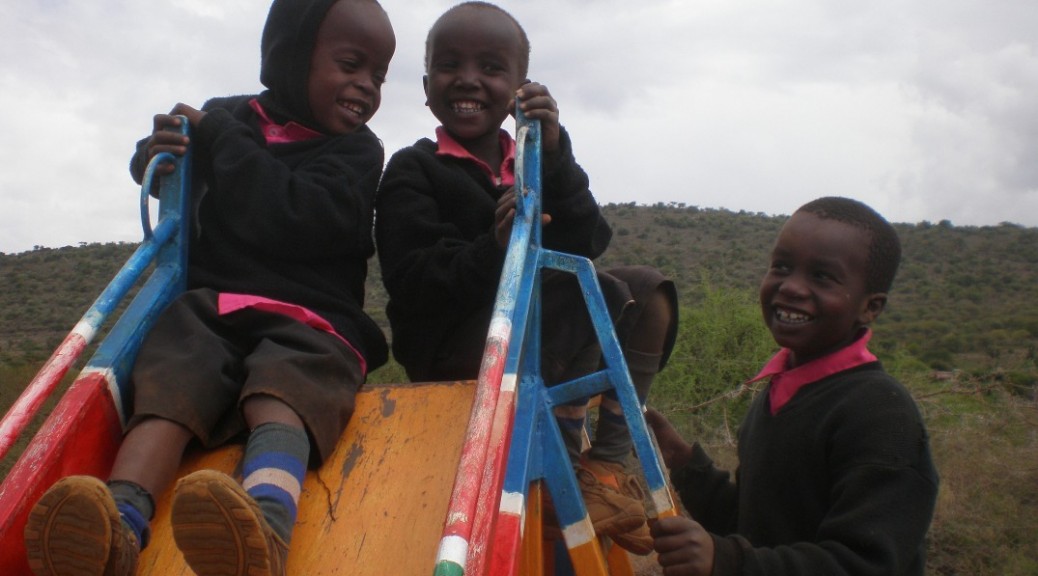 It’s the start of a new school year, where 28 children entered baby class, bringing the school total to 130 children. All have UK sponsors who pay £16 a month to support their education. It’s lovely to see the new 4 year olds, but they do bring some strange problems. Most have never seen or used a toilet before, so we find little piles scattered around the school compound. After a term, the teacher has got them well trained so all is well   –   at least until next year’s intake.

The pants run……..
Many Maasai children cannot afford underwear. Thanks to a kind donor, we distributed 260 pairs of pants to the children. Now they have no excuse.

A pride of lions (or lionesses) – Hellen’s story…….

Hellen Pemba Maloi is one of the many people who has gained from the school. She collects and sells firewood for the school kitchen. Hellen lives in a manyatta – a collection of huts in a thorny twig stockade. In charge is one man, Pemba, who lives with his many wives and children and grown up sons and their families. Grown up daughters move to their husband’s manyatta, the traditional way of life for the Maasai. The Pemba family manyatta has about ten huts. Their livestock return to the manyatta every night for protection from hyenas. Flies are everywhere. Most huts have twig and dung walls and roofs. Some have plastic sheets and bags on the roof over the dung to keep out the rain.

Hellen invites us into her windowless hut and we grope our way in the dark. Visitors are always welcomed with sweet milky tea made on an open fire. It is unbearably hot inside the hut and our eyes stream from the smoke.  Roger has to close his and Hellen asks if he is asleep.

Hellen is the middle of three wives but she doesn’t know when she married or her age (in her fifties probably). She has six children plus a baby gifted by her daughter – a common Maasai practice. She has become this baby’s mother.

“How many childen does your husband have?”
I don’t know – maybe 20”

“Yes, I’ve always made beads but now I collect firewood two days a week and sell it to the school. It’s a one and a half hour walk with my donkey. Last year I earned 12,000 shillings” (£95).

A note about the mother in law. She has ‘died’ twice. On each occasion, funeral arrangements had been made. Her son was preparing to anoint her body with boiled sheep’s fat when she woke up and scared the living daylight out of everybody.

Hellen has only one eye. “What happened to your eye”
“An infection when I was a little girl”

What would be a good gift for a Maasai family?  A quick answer: “Iron sheet! For the roof, to stop the rain washing away the dung. If not iron sheet then clothes for the children or food.”

Polygamy is common in the traditional Maasai families. The highest number of wives we have found is four with a combined family of 32 children. The men with the most livestock will have the biggest families. Younger couples are usually monogamous with smaller families – especially those who are educated. Education of the women is the key to smaller Maasai families.

The Maasai are famous for their age related ceremonies and we have attended many over the years but this is our first funeral. Any funeral is a sad occasion, but this one more so due to the tragic circumstances. It’s for a 16-year-old boy, Isaac, the younger brother of the school’s security guard who lived  about 400m from our school. Isaac had only been in secondary boarding school for 4 days (nearly all secondary schools in Kenya are boarding) when a thief entered the school. The police were called. They entered the school and began shooting. Isaac was shot dead and a further 30 school children ended up in hospital. It reminds us how lucky we are to live in a country where only experienced and trained police are permitted to carry guns.

In the bush, bodies are buried 6 feet down on the family’s land, but it has not always been so. Before the land laws of about 30 years ago, all Maasai land was un-owned common land. Many Maasai families would live close to each other in something similar to an English village with plenty of space between ‘villages’. When someone died, after the funeral ceremony, the body was carried 4km into the bush and left for the hyenas to eat. Now, the bulk of Maasai land is split into small parcels of land, owned by families. There is a hut on each land parcel so no open common land to leave dead bodies, hence why they are now buried.

The funeral is a true community event. For days, community elders (mainly men) meet to discuss the arrangements. The community members donate money, typically a day or two’s salary, and this money is used to pay for all the funeral expenses.

All the projects in brief………..

School bore-hole.
The pump broke after about 6 weeks, so we had to take out the 500 feet of pipes (148m), replace part of the pump and re-insert the pipes. It is all working again now and supplying excellent quality water to the school and community. Cost – the replacement pump part was free but we had to hire a crane for its removal at £360. More about the bore-hole here.

Clinic
For some years, we have been talking with a USA medical charity (Medicforce) about the possibility of a community health clinic at the school. Now that we have abundant clean water from the bore-hole, this can be a reality. We are starting to build a clinic, funded by a UK Rotary club. We are supervising the building and Medicforce will be providing the medical equipment and running the clinic. All should be up and running by the end of the year. Cost of the building will be around £13,000 – £15,000, including the plumbing and electrics.

Rain
In our last newsletter, we mentioned that the area was entering a drought. We are pleased to say that there were heavy rains in December and again during February, so fortunately a drought has been avoided. Sadly, some animals died before the rains came.

Repairing other charities’ pumps
This work continues with a few more local pumps repaired. We have identified an area close to the Tanzanian boarder with around 2,000 pumps, where about half are broken. These are deep water pumps requiring a crane for their removal and repair. Currently, there are not enough funds to repair these, but if we are able to raise enough, we will send a team of people and crane to repair these en masse. A basic repair costs around £500 per pump, rising to £1000 for a full replacement and base repair.

New classrooms
For the last 2 years, we have raised £12,000 each year via the Big Give to build 2 more classrooms as our existing 5 are now all occupied. The building starts soon ready for next year. New classrooms means new teachers so we also have to build more teachers’ accommodation. This is currently unfunded. If you know someone who would like to donate to this project, please let us know.

Cost of a school meal.
We have now finished the school accounts for last year. Our daily spend on food per child was 12p. This included a mid morning snack of porridge or tea and lunch but excluded the fire-wood or cook’s wages. Compare this with the cost of a UK school lunch.

Thank you
As always, many thanks to our wonderful sponsors, supporters and donors, as without your help, these improvements would not happen. 100% of any money we receive is spent on the projects in Kenya.

Following the comments on the last newsletter, we have made a few changes. Please give us your comments to this one so we can continue to make improvements.

See here for the previous newsletter.