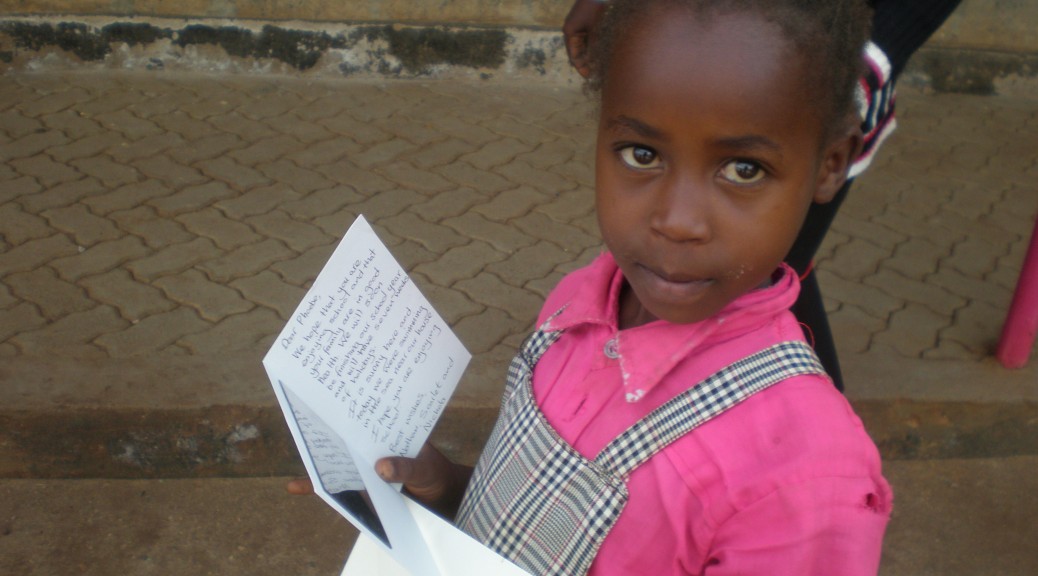 Like September last year, this newsletter is written from the comfort of our home in England rather than whilst covered in sweat and flies in Olepolos Kenya. The reason is that our usual Kenyan hosts are currently doing their 11th tour of the UK. The Maasai Warriors perform to schools during the day and the public in the evenings.

The five male Maasai Warriors all own cattle and goats  – most Maasai men have a few animals. September is always dry in Olepolos  but this year has been particularly severe. There has been no significant rain since March. All the grass is now parched and eaten and the men have moved their animals the long distance to Tanzania where there is a little more grass. The next rains are not expected until November.

We asked the school secretary about the effect on the children:

“You know in most of the schools (apart from Osiligi Obaya as we are strict and serious with our teaching) the children are absent because they shifted together with their fathers to look for greener pastures for their animals.”

Perhaps this helps to explain why many Maasai children do not do well at school. Another problem with the men being away is money for the family. The men make money by selling a few goats. However, no money will come to their families until they return to the area after the rains have started. In the mean time, the mothers scrape what little they can find to buy food.

We have just re-started the adult classes of teaching agriculture to the community. Because of the drought, it is only the women who attend as the men are living away with their animals.

In September, the sun is directly overhead. Plenty of sun means plenty of electricity for the school and plenty of water from the solar powered bore-hole. Many of the other sources of water have now dried up so our bore-hole is a life-line for the whole community for many miles around.

We are proud of the links our Kenyan school has with other schools in the UK. Last year, we tried a sunflower growing experiment between our Osiligi  school in Kenya and a school in Scotland, to see who could grow the biggest sunflowers. Unfortunately the goats ate the young plants at the Osiligi school  – not a problem in Scotland. This year, we are repeating the experiment but as we now have the fenced agriculture area, the goats should no longer be a problem. With the satellite broadband at the school, linking the two schools to compare the growth is now much easier. Another great learning experience for the children.

Every year we have a new intake of 25 children, so we must build another classroom and provide accommodation for the additional teacher – Hellen.  Without this accommodation, we cannot attract good teachers to our rural area. Fundraising for teachers’ accommodation is never easy but we are very pleased to announce that we have just received a donation to cover about 2/3 of the next house.

The new office and classroom built this year are recently finished, ready for the new intake of children in 2015. We now have 7 classrooms and an office.  These were both funded by the many donors whose donations were doubled in the 2012 and 2013 Big Give Christmas Challenge.  We are pleased to announce that the Charity has been accepted into the 2014 Big Give Challenge to build the next classroom. More about this early December.

A big thank you to all the many donors who make these project possible. As always, 100% of all donations go to Kenya to support these projects