Many will have met Richard, the leader of the troupe of Maasai Warriors. When we arrived in Kenya a few days after he had returned from the UK, Richard was in considerable pain. A few days later, he had an emergency operation to remove his appendix. So what, you may be thinking. But it turned out that he was the Only Person in the community of about 1000 people who had had a general anaesthetic and an operation. A few Maasai had seen him unconscious in hospital and thought he had died. Once home, queues of people came to ‘view the person who had risen from the dead’. No free health care in Kenya.

It’s the end of the school year. The community are grateful to us and the school governors for providing the school, so they put on a closing ceremony to say ‘thank you’, all paid for by the community (each family contributes a little).  We are touched. This community have so little but they are happy to share to show their appreciation.

For the closing ceremony, the district Minister of Education attends – an honour for this school. The quality of the school has impressed the Minister so much that he asks us and the other school governors to make time to meet the District Governor on our next visit to Kenya. We must be doing something right.

Most of the sponsors have contributed to a food parcels for each school child’s family. As there has been no significant rain in this area for 7 month, this year it is a real life saver. The lack of rain brings its problems as mentioned by one of the school governors:

“I had a very rough time last Sunday criss-crossing the streets of Nairobi with my cattle heading to Thika town(40km north of Nairobi)to look for pasture for my herd! It is very dry in Olepolos and everyone is on the move with their livestock.”

We have reached a milestone with the school solar powered water pump. Over the past 3 years, it has pumped 4 million litres of water, that’s enough water to fill 12 large swimming pools. At the average cost of buying water in Kenya, the solar installation has now paid for itself in just 3 years. It should last for another 20 years or so.

However, it’s not so lucky at our 2nd borehole. Two weeks ago, someone tried to steal one of the solar panels. We had installed the panels in such a way that they could not be removed, but this did not stop the thief breaking a panel trying to extract it. The result – no water for the community in a desperately dry period.  The community were so angry that the elders got together and cursed whoever had been involved. The elders expect the person, or a member of his family,  to die soon.

The project to repair broken hand pumps continues. Eric and his team have now  repaired 210 pumps scattered across Kenya.

Since September, the orphanage has it’s first 5 children. These children really are on the bottom rung of the ladder, carrying with them all the usual social problems from constant bed wetting to breaking everything. Interestingly, in just 3 months, the house mother Nora says that all have improved considerably. It just shows what a little TLC can achieve.

The clinic continues to provide an excellent service to the school and community. The doctor Sylvester is building a great reputation having skilfully and successfully stitched up the scrotum of one of the school children. The boy fell out of a tree, ripping apart his testicles on a sharp branch. Sylvester is also a dab-hand at delivering babies in the African bush. 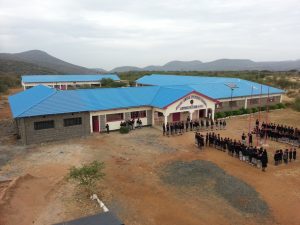 In the above photo of the school, notice the 2 new classrooms (numbers 8 & 9) being built on the left. Many people contributed towards these classrooms over the past 2 years. They will be ready in January when 25 new children start their education.

In December we start the campaign to raise money for the 10th classroom. For one week only starting Sunday 4th December, your donation will be doubled by a kind donor – see here for more information – Double your donation. Perhaps you can help us build the next classroom.

As always, our thanks to the many sponsors and donors who make this all possible.

Finally, here are a few videos from the closing ceremony: