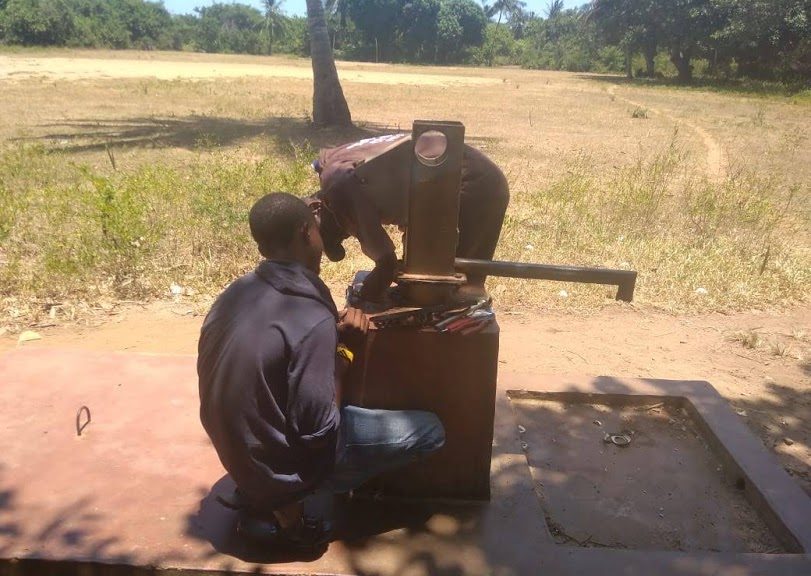 The above photo shows another hand pump repaired by the charity. Eric and his team have now repaired around 1000 pumps since 2017.

We have said in many newsletters that we are aiming for Osiligi Obaya primary school to be one of the best schools in Kenya. At the end of this year, you can judge whether these are just empty words. We now have our full complement of classrooms and this year will be our first exam class, when the oldest children sit their national KCPE exams which define what type of secondary school the children can attend. So in late October, the school will close, everybody except the head teacher must leave the school site and an outside exam invigilator will sit in during the 3 days of exams. These extreme measures are to prevent cheating, rife in Kenyan schools. After the cheating was stopped and schools were unable to buy early copies of the exam papers, some private schools previously at the top of the league tables suddenly plummeted.

Here is Samuel, a class 8 student talking about the exam year. (You may want to turn on subtitles, bottom right on the screen)

As you can hear, all the class 8 children are boarding at the school. This is normal in most Kenyan schools to give the children the best possible chance of a good mark.

Our daughter, son – in- law and 2 grandchildren both visited so we were able to see the school and Kenya through their eyes. Our daughter and son-in law are both teachers working in Hong Kong so they shared Hong Kong life with our pupils including using chop sticks and chinese writing.

White children are a novelty in Olepolos and at the school so the 2 grandchildren had celebrity status. Their hair was constantly being touched, their skin felt and the younger pupils wanted to sniff their skin.

The youngest class PP1 were introduced to scissors and glue. It is hard for us to imagine the amazement and rapture handling this new tool and sticking bits of paper brought. Older pupils wanted in on the action. They are so used to copying the teacher, some were literally terrified to create freely and sat waiting for instruction. We expected cynicism from a 14 year old but he had a great time – a welcome break from exam revision. Many impressed us by cutting precise animals without a sketch.

There has been an exciting development in our PP1 and PP2 classes where children are now learning through play. This is a big change from their usual more formal learning. Activities include playdough (Africa friendly recipe) water play, drawing and colouring, dinosaurs, jigsaws, homemade tent, shop, lego, construction toolbox, doctor’s set, plastic fruit etc. A large suitcase of dressing up clothes is also heading to Osiligi in March.

It has been a great success. Teachers Catherine and Sylvia are impressed with the children’s imagination, creativity, co-operation and improved communication skills – all key components of the new competence based curriculum. The pupils are particularly impressed with the water, the playdough and the homemade tent.

Lego – a great success with all classes but too tempting for many children. We spotted some children hiding lego pieces in their jumpers. The security guard had already been put on lego alert and asked to frisk children as they left school.

Teachers using corporal punishment on children is common in Kenya but is banned at Osiligi school. Unfortunately, some of the teachers had forgotten this rule so we have put in place various measures to re-educate the teachers and remind children of their rights. We also had a meeting with the parents to reassure them that there will be no beatings at the school and to ask for their support to achieve this.

One minute a seat can be used by children, the next by chickens (see photo below). The deputy head teacher, Rispa, is telling the girls how to wash their underwear. The advice given is to dry them somewhere the father cannot see them, outside so that the sun can sterilise them but covered with netting so they don’t look like underwear.

We need more sponsors right now to support children of all ages at school. More details on sponsorship here .