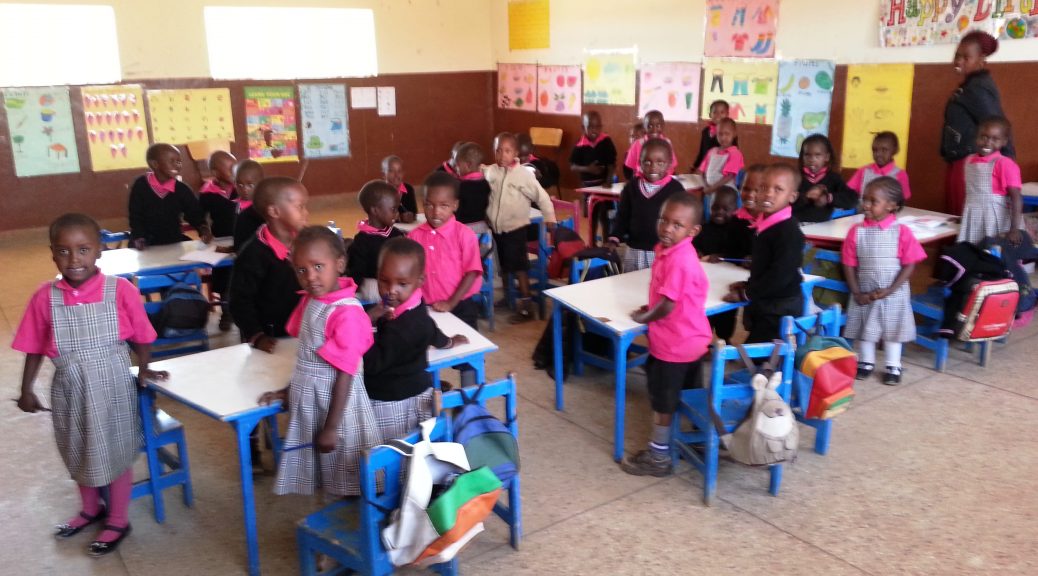 The photo shows the 25 four year olds who started at the Charity’s school in January 2017 bringing the total enrollment to 209 children.

How many international airports do you know where there is a power cut every 15 minutes? Welcome to Nairobi airport where candles are lit and blown out every few minutes and there are constant delays as the latest electronic security and check-in equipment grinds  to a stop – again. However this has to be better than our outward flight where we wait for thirteen hours. Kenyan Airways have cancelled the plane. Why – who knows? Certainly not the passengers and definitely not the staff. We eventually arrive a day late. An apology?  Don’t bother – its Kenyan Airways, “The Pride of Africa”. In the flickering candle light we spot the sign – “Jomo Kenyatta, The Flagship Airport. – Setting our Sights High”

Maasai life revolves around ceremonies, social gatherings where everybody goes, no invitation required. We have attended many ceremonies, but a 2nd wife ceremony is a new one for us. Some of you may know Lydia one of the Maasai Warriors. Her husband recently took a second wife. He is in his fifties and the new wife in her teens. Fathers sell their daughters in exchange for cattle and goats; a typical wife costs around 4 cows and 10 goats. His new wife’s extended family  come from Nairobi for the afternoon to the fundraising ceremony  to build  a hut for the second wife next to Lydia’s. Women from Olepolos spend the entire morning  preparing vegetables and chapatti and the men roast a bull  for the 150 guests. It is an important part of Maasai culture that they share food generously.

We leave before  the men’s speeches  start blasting from the ear-piercing, distorted sound system. No matter, we can still hear them across the bush for several hours in the school office. These sound systems are an endurance test featuring in every ceremony,  church service and gospel road show and there is only one volume: full.

The Maasai use a lot of traditional herbal medicines collected from the bush and we are often encouraged to drink a bitter tea for colds made from unspecified herbs. Some of these traditional remedies give Doctor Sylvester in our clinic a headache. How can he persuade his patient that rubbing cow dung into their leg wound isn’t the best cure for an infection? Lack of knowledge has more serious consequences. There is widespread denial about the prevalence and even existence of HIV aids,  dangerous in a culture where men gain status from having several wives.  Sylvester wants to start an awareness programme but he is struggling with how to make it culturally acceptable.

Government university lecturers and doctors have been on strike for two months with no end in site. The doctors want a 300% rise.  Not a good time to have a serious illness or need hospital care.

Doctor Sylvester recently treated his first case of malnutrition, a baby. As you may have seen in the UK news, East Africa is in the grip of a serious drought and during times of  drought the goats don’t produce milk and there is no money for food. The government has started feeding programmes in parts of Kenya but not in the Olepolos area. It is needed.

In Olepolos, the ground is parched, there is no grass for any animals, some are dying and the rest are very thin and un-sellable. The price of most food has increased by about 30% over the past 2 months because of shortages. Parents are finding it increasingly difficult to feed their children so our mid-day school lunch is a life saver for most of the children.

The new baby class started in January, bringing the total number of children to 209, spread across the 8 classes. We built 2 more classrooms last year (shown on the left of the photo) thanks to the generosity of donors who gave over the past 2 years.

We have a new headteacher, Mr Bonface and the moment we arrive at school we notice a change. Everywhere is cleaner and there is an air of purpose and industry. The caretaker is busy cleaning windows and displays and slogans appear on buildings such as “little minds discuss people, average minds discuss events but great minds discuss ideas” .  Teachers, parents and pupils all like him.

Mr Bonface has set up mentoring groups. Each teacher meets with their single sex group of 12 pupils to talk about sensitive personal issues such as growing up. We have not seen anything like this in any  Kenyan school we have visited.

We train some of the staff, teachers and others,  in computing. It’s a sharp learning curve for some who are using a keyboard for the first time. Others are getting to grips with Google classroom and are quite excited that they can teach an entire class using no paper – perfect when resources are limited. If anyone has any unwanted spare Chrome Books, we would love to hear from you.

Something new. It’s Saturday  morning and it’s lesson time. The two older classes have Social Studies today and they search Google for information on Kenya’s mining resources. Again, typing is slow but they are clearly enjoying it immensely. We ask if they mind coming to school on Saturday and they look at us as if we are clearly mad.

In the new orphanage we have five boys and two girls aged between 5 and 12. Only one is an orphan. The others come from deprived homes often with a single parent who can’t manage to keep the child clean or well fed. Nora the matron is strict but kind and the children are blossoming. One, aged 11 has started to speak and smile for the first time. Another aged 12 read his first sentence last week. A bit of love and stability is working wonders. One girl asked us to thanks all the sponsors for helping her escape a very grim future. They go home during the holidays to maintain the family bond. 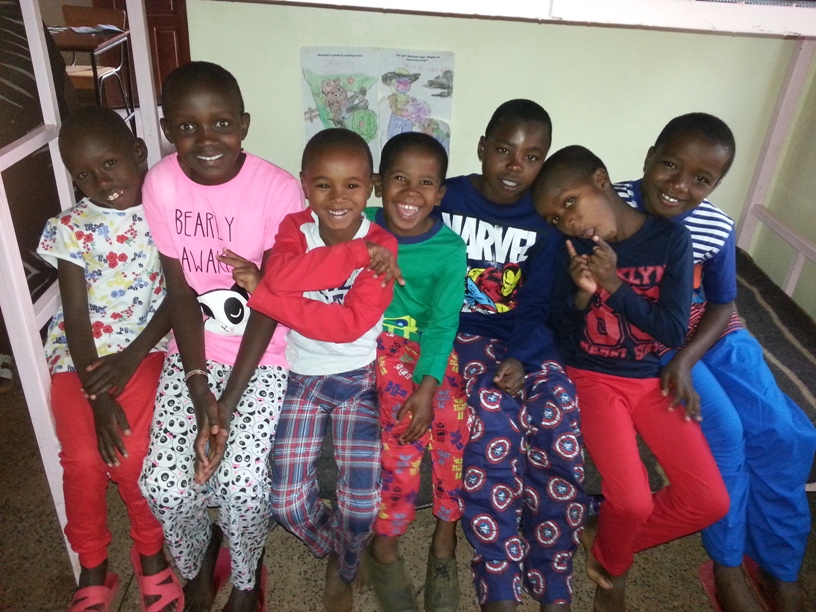 We mentioned a Maasai ceremony at the begining of this newsletter. Here is a short video from a thanks-giving ceremony. All ceremonies have preaching, usually in 2 languages  (usually kimaasai and swahili) always by men.

And finally, we have recently updated the video showing all the charity’s work and projects. You can see it here: