Simple changes can sometimes make big improvements. The school has always had a ‘feeding programme’  where the maasai children are given morning porridge (watery boiled maize meal) and a vegetarian lunch – meat is expensive. The new head teacher noticed that most of the children have no breakfast before coming to school so moved the morning porridge to the start of the school day . Result – a  big improvement in the children’s concentration and behaviour, at no extra cost!

We now have around 180 sponsors educating the 209 children at the school. We all think about maths and science when education is mentioned but there are spin off benefits. Diana Siamanta from the eldest class writes about some of the benefits of education:

The school has owned laptop computers for some time but slowly they are being incorporated into lessons and lesson plans. Teacher Edgar is taking on the difficult task of moving the ICT project forwards; getting the IT illiterate teachers to now do all their planning on the computers and integrate computers into their lessons. This has saved a lot of money because previously, all the teachers’ resources had to be purchased from the Kenyan Education department.

Anyone who follows athletics will know that Kenya produces some  world class runners. We are thrilled to discover we have an excellent runner in school. Everlyne Naisula, aged 12 is now the county champion at 500m. Running at county level brings its own challenges – transport and costs. The family cannot help financially so the school has to pay for all the costs of taking her to the championships. We have shoes for Everlyne but many of the children she runs against run bare foot.

Not every child is an expert runner so the school is keen to have other activities at sports day. Does anyone have any older style sports equipment they can donate – sack races, egg and spoon, three legged races etc. It needs to be small because of suit case space.

Janet and Derek recently visited the school and orphanage, bringing with them a £20 donation from a local church. The children in the children’s home / orphange all had a new top, shorts and flipflops. £20 can go a long way in the local Kenyan shops. A few comments from Loise  Metian, one of the girls in the children’s home:

“At school we eat enough food than at home
At school the sleeping place is very good than the skins of animals at home.
At home I was wearing dirty clothes but at school I wear clean clothes.”

All the school children are encouraged to develop non-educational skills so we are pleased to see most of the children enrolling in scouts. First aid was taught to the children and they had a 3 day camp (in tents) at school.

To widen the skills of the children, a  number of school clubs have been started. The music club  has the added benefit of educating the wider community through song and dance. Most of the parents in the area are illiterate so the music club perform their songs in the community to teach the parents about the effect of drugs, HIV and the effects of FGM. They recently performed in front of the Deputy President of Kenya.

The walking and hiking club gives the children an interest in their wider area as well as non classroom learning and bonding.

The art club teaches art – something missing from the Kenyan curriculum so not covered in normal Kenyan lessons. Donors have sent most of the art materials.

The local weather has continued to be a challenge. The rainfall over the past 2 years is well below average and there is very little vegetation for the animals. Most Maasai do not have any paid jobs; they scratch a living from raising goats and cows. There are no cows left in the area due to the lack of grass and most goats are just about surviving by eating leaves. Many are dying. The drought is country wide and the cost of basic foods is rapidly increasing. You cannot sell an emaciated animal so money in the area is very tight. There is unlikely to be any rain before November so things will just become worse over the next few months. 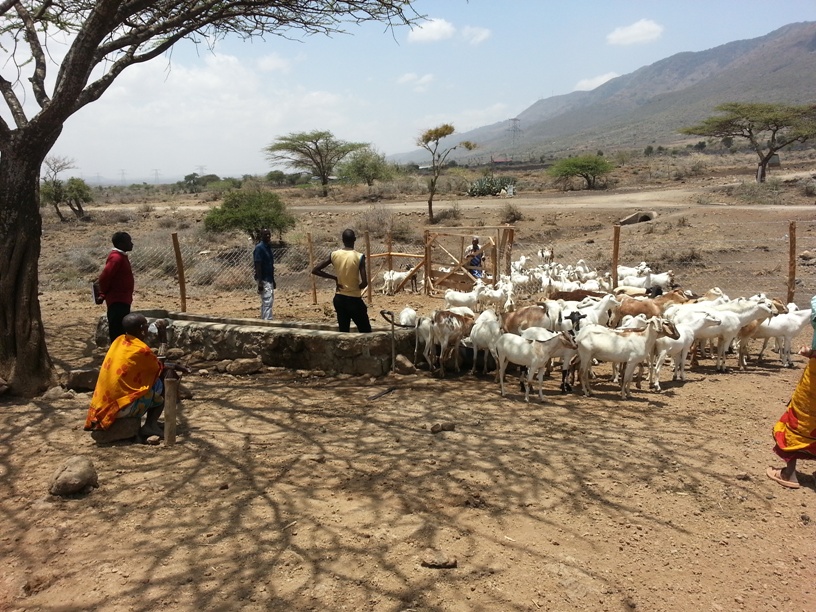 We mentioned in the November 2016 newsletter that the school borehole, installed in 2013 had pumped over 4M litres of water, enough to fill 12 large swimming pools. A few weeks ago it suffered its first major breakdown. We thought the pump, 150m (500 feet) down inside the borehole had broken, but on removing it we found  a broken metal adaptor. A simple fix and the solar pump is now working again. The lack of rain is making all our borehole struggle to pump enough water. Demand increases and the water table in the surrounding area has reduced. Water  from this borehole has been slowly reducing, year on year. In this dry area of Kenya, a 150m deep borehole is just not deep enough!

The project to repair the many broken hand pumps in Kenya continues. We are now getting closer to 300 repaired pumps. With each pump serving say 200 people, that is another 50-60,000 people with clean water.

As always, a massive thank you to all the donors and helpers as without you, these projects would not be happening.