One of our biggest projects at the school has been the building of a bore-hole to supply the school and community with clean water. Some people have asked for more details of the project so this page is a ‘warts and all’ account. It is written with more technical information than our newsletters.

Pre-drilling
There is little point drilling a bore-hole if there is no water underground, so it is usual to start the process with a geological survey and vertical electrical sounding. The VES sounding attempts to map the availability of water by taking resistivity measurements using probes at a set distance apart see – wikipedia

In our case, we located 2 places with good water. Both had a water layer about 120-150m below ground level.

Before commencing drilling, a bore-hole needs a drilling permit and an environmental NEMA report. 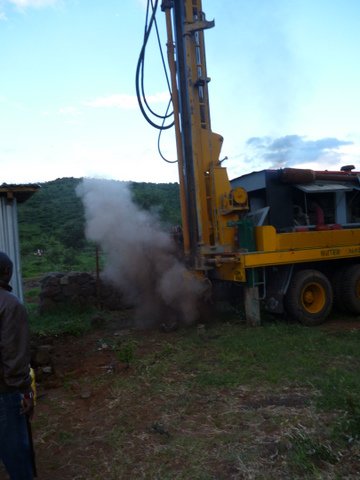 Drilling
A drilling rig is required for the drilling. As the drill progresses into the ground, extra drill rods are added until eventually the drill reaches the required depth; 160m (500′) in our case. We employed a geologist to supervise the drilling process; one of the best decisions we made. Once drilled, the bore-hole must be lined with steel casing to stop the bore-hole collapsing and to screen out the large sand particles from entering the pump. The casing is plain in the areas with no water and with fine slots in areas with water. The drillers were unable to force the casing into the bore-hole because the bore-hole had not been drilled straight. They tried to pretend that all the casings were inserted but the supervisor found the casings hidden in the back of the lorry.

The only solution was to drill a second (straighter) bore-hole. This was done, then after many days of extra work, the casing was inserted correctly. Between the casing and the bore-hole, a gravel filter pack is added. This helps to keep the sand away from the pump and filters the water. The drillers tried to pretend that they had fitted all the filter pack, whereas they had fitted very little. Once again, the supervisor spotted this and corrected the situation.

During drilling, the water layers tend to get blocked by clay and other debris from the drilling. For maximum water yield, the bore-hole must be developed. High pressure water and air are forced down the bore-hole to open up the pores. After development the bore-hole is given a 24hr test pump to pump out dirty water and to check what yield the bore-hole can supply. In our case, the bore-hole is able to supply 2,800L / hour. Finally, samples are taken for bacteria and chemical analysis. Our water is clean with a slightly elevated level of floride (1.55mg/L at our bore-hole verses a WHO recommendation of 1.5mg/L or a USA EPL safe limit of 4mg/L), but still deemed fine for drinking by the testing laboratory. 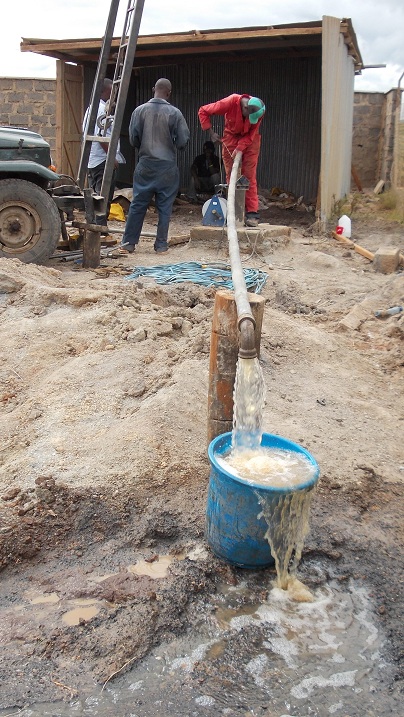 Pumps
There are 3 types of pumps used in Kenya, mains powered, solar powered and wind powered. The cost of solar has decreased over the years so the main choices now are solar verses grid electricity. We want the Osiligi Obaya school to run throughout on green technology so we chose solar. The higher initial cost will be offset long term by the lower running costs. Sunlight in Kenya is very reliable and very predictable. Countries on the equator are not short of sunlight!

We chose a Lorentz pumping system and simulations suggested that with 1.4KW of solar panels, we would achieve about 8000L/day. As the maximum pumped rate was 1300L/hr, this matched well with our bore-hole capability of 2800L/hr max. See this sheet for the simulations. We made 1 additional change to the system. To improve the efficiency of the system, we designed it so that it can point South for April – September and North for October – March. This simple change gave us an additional 500L/day for almost no extra cost. 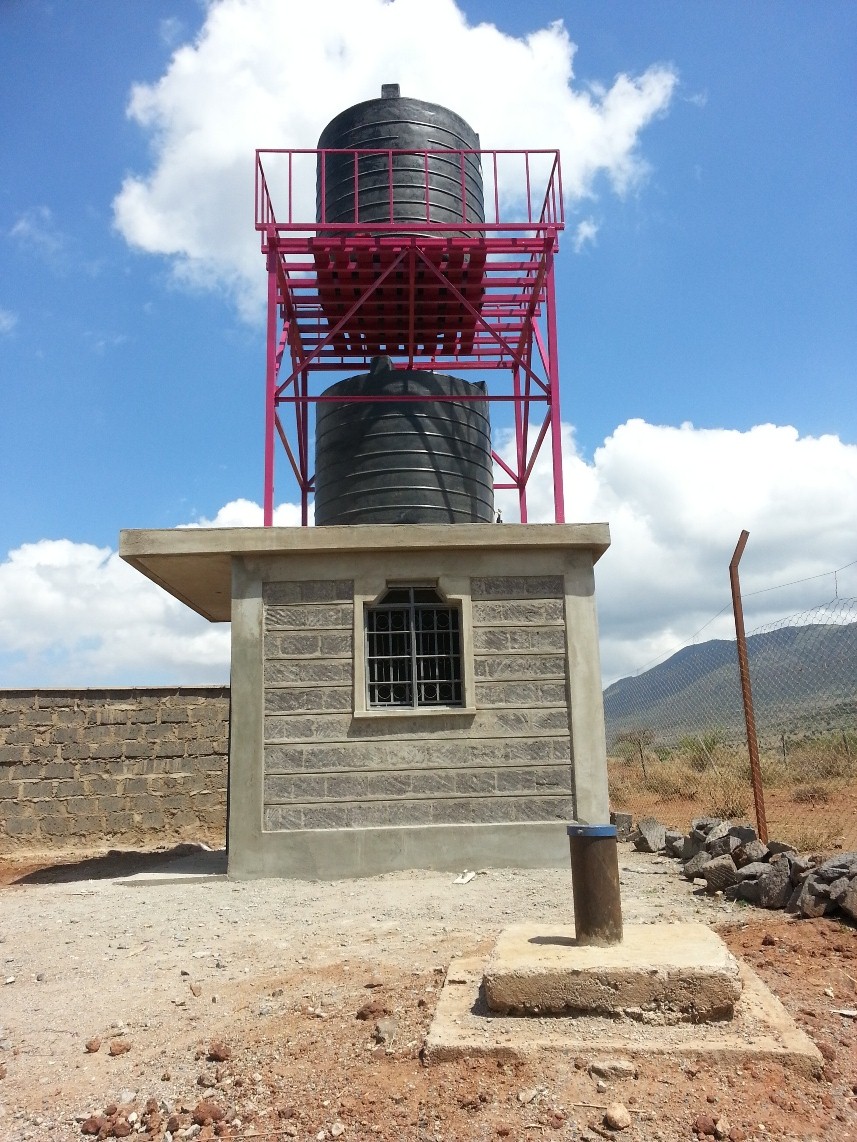 Tanks and stand with bore-hole in the foreground.

Tanks
Solar only produces water when it is sunny or bright. To match supply to demand, it is usual to add water tanks. In our case, we added 2 tanks, both 5000L each. The top tank is used to gravity feed water to the school and the bottom tank supplies water to the community taps. If both tanks are empty, it will take about 1 day of sunlight to fill them. 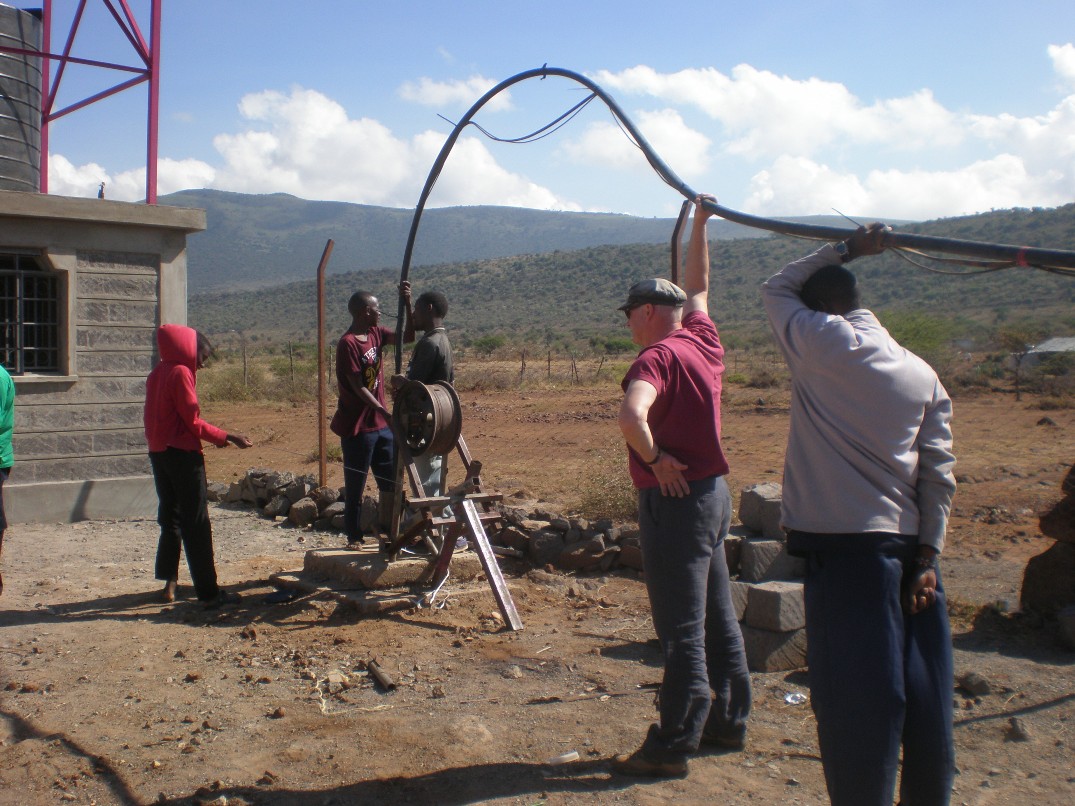 Trying to push the long pipe down the bore-hole.

Fitting the pump
The pump must be connected to a long pipe and the wires, pump and pipe dropped down the bore-hole. That’s the theory. For some reason, after 4 attempts and many days of work, we were unable to get the pump and pipes down to 148m; the correct operating depth for the pump. Eventually, we gave up using a long continuous pipe and employed another contractor to use a crane and winch to insert jointed pipes. After a couple of hours, the pump and pipes were completed. 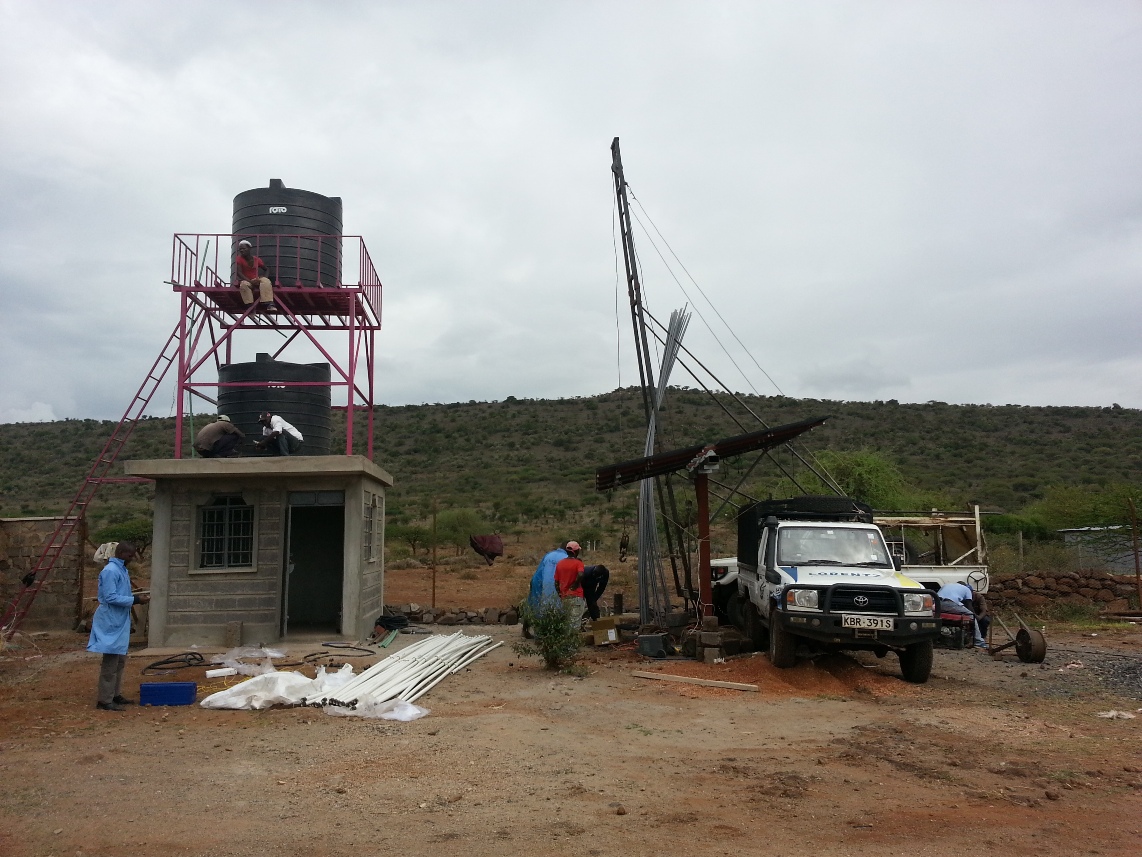 Using a winch and crane to insert the pipes.

Solar panels and controller.
A frame was constructed to support the panels. We used 8 X 140W panels, so about 1.44KWp. The frame could be pointed North or South as mentioned above. The controller converts the DC from the panels to low voltage 3 phase AC for the pump motor. Finally, a float switch in the upper tank turns off the pump once the tanks are full. So far, we have only been able to test the system on sunny days. On a cloudless day, it is producing 12,000L. July will be the most difficult month as it is mainly cloudy. We will have to wait until 2014 to see how well it performs. 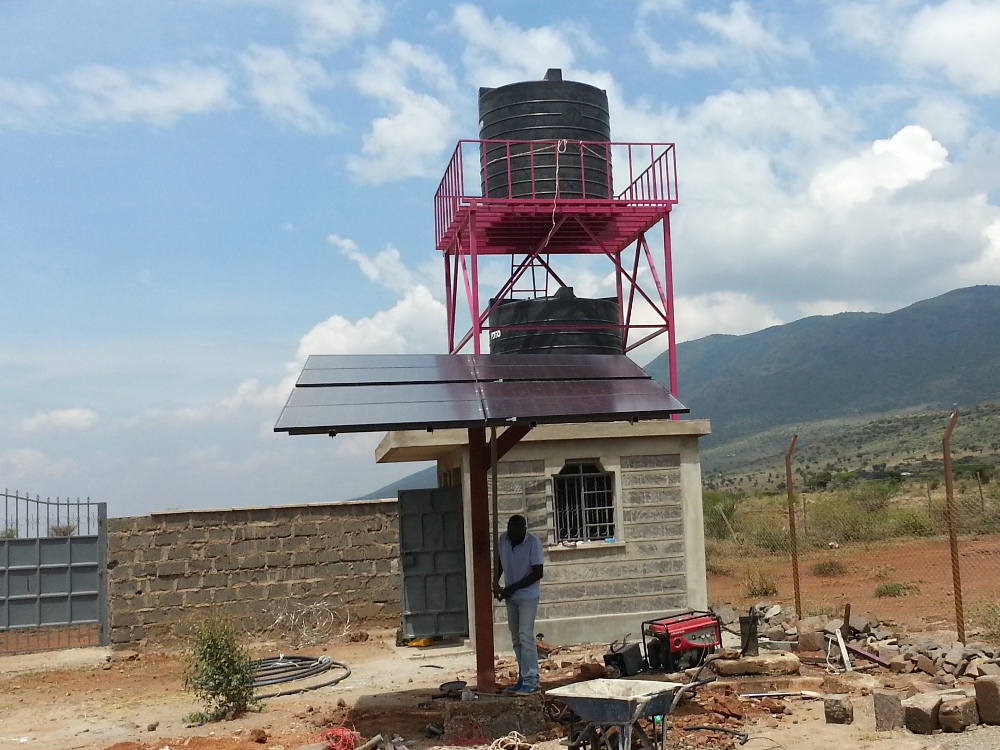 Funding
The installation was funded by a combination of general Charity funds and a UK donor. The donor gave £22,000 and the general funds supplied the remaining £5000. 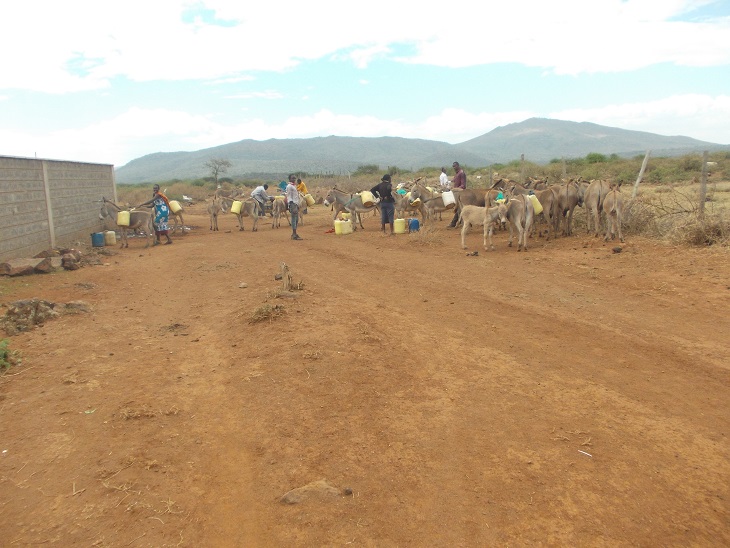 Usage
We expect the community to take about 4000L/day during the dry season, to sell to water trucks about 2000L/day and for the school to consume about 2000L – 4000L/ day. As mentioned above, late June/ July will be the challenging month when the dry but cloudy days will limit the pumping to around 6000 – 7000L per day, but the dry days will create a high demand for water.

Water payments
Originally, we wanted the community to pay something small for the water (say 1p/day/person) to cover the cost of maintenance. We started an ‘honesty box’ type system. However, without someone there to collect the money, the system was being abused.  Now, the school sells the water wholesale to a retailer, and the retailer sells it by the container to the users. This way, the school covers its maintenance costs, the retailer has a self employed job and the community has water at a reasonable price. The only downside to this method is that the community now pay more for their water to cover the cost of the retailer collecting the money – honesty really is the cheapest way.

Problem log
After 10 weeks (Jan 2014), the pump broke. Inspection suggests it was a manufacturing problem in the pump, but we are waiting for confirmation from the manufacturer. The installer repaired the problem for free, but we had to pay for a crane to remove the broken pump. Total cost about £360.

Feb 2015. There has been a long drought in our part of Kenya and the water table appears to have receded, even with our very deep bore-hole. We are finding that we cannot pump more than about 5,000L per day without the bore-hole running dry. We will leave it a few more months to see what happens after the next rains.